China is helping to achieve the goal of ecological civilization with high-quality development. Low-carbon development is a core feature of improving the quality of development. In the Paris Agreement, China pledged to peak its carbon dioxide emissions around 2030 and strive to reach its peak as soon as possible. As the main force in China’s Dafeng process, more than 80 low-carbon pilot cities have promised to achieve carbon emission peaks by 2030. Under the guidance of the “two mountains” theory, the city is looking for and designing a peak road map and a practical action plan to achieve carbon emission peaks while maintaining healthy and stable economic growth.

In May 2019, the ISC’s Guide to Modular Design of Urban Carbon Emissions Peak Roadmap and Action Plan was officially published by China Environmental Publishing Group. The publication of this book has received strong support from many partners, including government departments, public welfare funds, think tanks and professionals, and I would like to express my gratitude.

Under the general trend of national carbon emission peaks and total control in 2030, urban low-carbon planning needs to develop clear peak targets and paths as technical support for urban development strategies. Among them, there are two scientific questions that need to be answered scientifically:

The above two types of problems can be further broken down into the following three chapters and 11 key issues, including:

The Guide is divided into three modules, which are organized around the above practical problems, among which:

Module 1 is a carbon emissions inventory, the main function is to quantify the benchmark, the status quo benchmark and find the short board;

The features and innovations of this book are mainly reflected in:

The solution was applied in the preparation of the roadmap for carbon emission peaks in Changsha City and Xiangtan City of Hunan Province, helping the city to develop a roadmap for peaking, providing a scientific basis for the design of target indicators for low-carbon city construction and promoting low carbon. Goal management was implemented in the city action plan and achieved the expected results.

How is the Dafeng economy win-win?

Based on the carbon emission inventory baseline and the peak scenario simulation results, the city can set positive peak targets and indicators and take action to implement the roadmap.

First, it is necessary to grasp the “bovine nose” of the Dafeng path target management system, and force the formation of a responsibility traceability mechanism to urge all departments to jointly promote the peak action;

Third, the government must ensure that the financial investment in low-carbon livelihood projects is built to achieve the goal of low-carbon and universal benefits.

Taking the study of cities as an example, before 2030, the social cost savings and direct economic annual benefits brought about by the achievement of the peak target will reach about 10% of fiscal revenue, accounting for about 50% of new fiscal revenue. The overall peak investment return period is about 13 to 15 years, with stable economic returns and long-term sustainability. 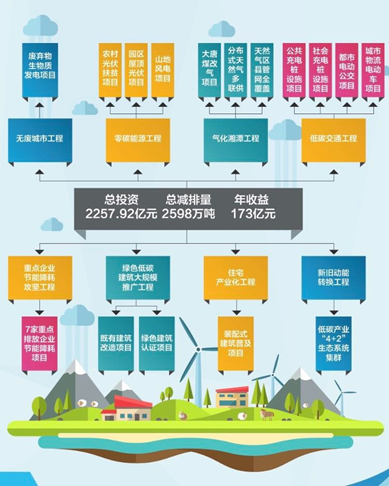 The peak of carbon emissions is the landmark of high-quality development of the city, which means the era of low-carbon economy, electrification and low-carbon life.

As the world’s number one carbon emitter and the second largest economy, China needs to promote the replication of climate change action and low-carbon project clusters in large-scale cities to achieve the goal of high-quality peaks in 2030 countries. Actively implement the “Paris Agreement” signed by 186 countries around the world, and work together with all parties to make an outstanding contribution to the goal of controlling the temperature rise of the earth in the 21st century to 1.5 to 2 degrees.