General Secretary Xi Jinping has repeatedly stressed that tackling climate change is a common cause of mankind, and China will bear 100% of its obligations. In order to achieve the goal of the Paris Agreement to control the increase in global average temperature below the pre-industrial level below 2 °C, the carbon dioxide emissions promised in the “Strengthening Climate Change – China’s Independent Contribution” will be reached around 2030. Peak and strive to reach the peak as soon as possible. In order to implement the relevant requirements of the “13th Five-Year Plan for Controlling Greenhouse Gas Emissions” to promote the peaking of some regions, more than 80 low-carbon pilot cities in China have proposed the goal of reaching the peak. And proceeded to carry out the Dafeng road map study.

Urban peak and path selection is a scientific system engineering. At present, it also faces some bottlenecks. For example, the emission trend forecasting process is too simple to support path selection. There are “two skins” in the peak target and project support, and the action plan lacks social economy. Sexual analysis made the project have a short board of “last mile” and so on. The purpose of this training seminar is to discuss the solution to the above pain points. By sharing the results of urban carbon emission peak maps and action plan case studies, we will refine the scientific and standardized design methods, compile high-level urban high-quality and low-carbon development strategies, and promote the implementation of action plans.

From September 28th to 29th, 2018, before the eleventh holiday, on the beautiful West Lake, the “Chongda Peak Roadmap and Action Plan” training seminar was successfully held. The training seminar was jointly organized by the National Center for Climate Change Strategy Research and International Cooperation (NCSC), the Association for Sustainable Development (ISC) and the Zhejiang Center for Climate Change and Low Carbon Development.

Director Xu Huaqing of the National Climate Strategy Center gave a keynote speech. Under the current international situation, China’s low-carbon industry is facing new goals and new tasks. Therefore, it is necessary to have new actions to study and formulate regional carbon emission peak maps and urban peak operations. The plan strengthens strategic orientation and path innovation, strengthens the goal orientation and implementation mechanism, strengthens demand orientation and system design, strives to achieve the goal of reaching the peak as early as possible, promotes the low-carbon transformation of economic development, and cooperates well in the battle against pollution prevention and promotes the construction of a community of human destiny!

Researcher Liu Qiang of the National Climate Strategy Center summarized the current national peak situation. More than half of the 13th Five-Year Plan. At present, the nine provinces (autonomous regions and municipalities) have set clear peak time for overall carbon emissions. Although the other provinces (autonomous regions and municipalities) have not set a peak time for the province as a whole, they are targeting key areas and pilot projects. Cities or key industries have set peak targets. Some provinces that did not propose specific peak targets also conducted research on carbon emission peaks according to their respective provinces. The 73 low-carbon pilot provinces and cities proposed peak carbon emissions targets in different ways, including 28 pilot projects in the first and second batches and 45 pilot projects in the third batch. At the same time, Director Liu Qiang gave a detailed explanation of the research steps, key elements, existing problems, method tools and data of the Dafeng road map.

The city’s peaks are forced to transform and develop low carbon value.

The characteristics of Wuhan City are that the low-carbon basic research is relatively early, and there are systematic and effective landing measures. Wuhan became the second batch of low-carbon pilot cities in 2012. Through the research of low-carbon roadmaps and action plans, it has made detailed target decomposition plans (including sub-regional, sub-area, and phased targets, and implemented responsible units). Six major support projects, five institutional mechanisms, one international cooperation, and three major safeguard measures were proposed. After soliciting opinions from various regions and departments, the Wuhan Municipal People’s Government issued the “Wuhan Carbon Emissions Peak Action Plan (2017-2022)” to form a strong government support document. In order to strengthen the implementation, the Wuhan Municipal Development and Reform Commission issued the “Wuhan Carbon Emissions Peak Plan 2018 Work Highlights”, emphasizing the work objectives, and required to complete the self-examination before the end of the year and submit it to the Municipal People’s Government. According to the preliminary evaluation of the medium-term plan, according to the preliminary statistics, the implementation results are quite gratifying. Five of the 22 indicators have been completed ahead of schedule, 15 are completed on time, and only 2 are delayed. The lag is mainly due to some special reasons, such as due to urbanization. The population is increasing, and the per capita green area is reduced. In the introduction, Wuhan City emphasized the concept of “leading” and taught the experience of “the old man is difficult, the boss understands it is not difficult”. During the project research and implementation, the leaders including the mayor of Wuhan actively participated in the outside publicity. While introducing Wuhan to the outside world, the government leadership also had a deeper understanding and recognition of the low-carbon cause, which was conducive to low The landing of carbon measures. The Wuhan case was hailed as the “best” case by Director Xu Huaqing.

Jiangsu Province put forward the concept of “low carbon new economy”. The low-carbon new economy is an industry cultivation direction. The core is to create an emerging industry that supports low-carbon development, integrate low-carbon development concepts and new economic technologies, models and platforms, and foster new powers and new industrial chains that will promote economic transformation and upgrading. New growth point. The “low-carbon new economy” has bypassed the internationally sensitive “low-carbon peak” problem. Low-carbon is no longer just a responsibility and obligation, but a new economy and a new development path. It is in a positive and positive language. Doing the same thing is a new expression of the Dafeng route. The Jiangsu case was hailed as the “most appreciated” case by Director Xu Huaqing.

Chongqing has its own characteristics in terms of geographical location and strategic positioning. Chongqing belongs to the inland cities of the central and western regions, the landforms of the mountains and the logistics hubs, the connection points of the “Belt and Road” and the Yangtze River Economic Belt, and the important strategic fulcrum of the development of the western region. The industrial structure of Chongqing is biased, the energy consumption is dominated by coal, and the urbanization process is developing rapidly. Therefore, in the low-carbon development path, the focus is on energy cleanliness, industrial low-carbonization, clean transportation, and low-carbon energy conservation in buildings.

The low carbon peak research in Gansu Province is characterized by its research and comparison of tool models. The models used include LMDI (logarithmic mean Dirich’s exponential decomposition method), STIRPAT (environmental impact assessment model), MAC (marginal abatement cost), GREAT (green resource energy analysis tool), BEST (low carbon development policy choice) Tools) and CURB (Climate Response to Regional Sustainable Development). The study found that there are some differences in the roadmap for peaking simulated by the two groups of models, and further research is needed on the reasons for their generation and how to optimize them. This research is a basic research. Doing such work and improving the accuracy of low-carbon roadmap research can lay a solid foundation for the large-scale promotion of low-carbon research.

Taking Xiangtan City as an example, ISC introduced the research methods and results of the city’s peak road map since 2016. The research team standardized the Dafeng roadmap design module, and the three modules, namely the carbon emission inventory module, the Dafeng scenario module and the Dafeng investment module combined report, provide policy makers with comprehensive scientific decision support. Based on the resource endowment and high quality development goals of Xiangtan City, the research puts forward four major fields, eight major projects and 18 key indicators, and analyzes the investment income of each project, and gives priority to the project through carbon economy ranking. The research results show that Xiangtan City can achieve the carbon emission peak target in 2028 under the Dafeng scenario, and reduce the carbon emissions by 10.9% compared with the baseline scenario. The relative emission reduction amounted to 4.21 million tons of carbon dioxide, and the industrial enterprise unit carbon economy output. Multiply, more than 50% of the incremental fiscal revenue is driven by the low-carbon industrial ecosystem, and Xiangtan enters the era of low-carbon new economy. The research aims to promote the project landing, with rigorous thinking, comprehensive analysis, solid work, and detailed data. It is praised as the “most standardized” case by Director Xu Huaqing. Based on the introduction of the case, ISC further developed the roadmap for the peak roadmap and the modular design of the action plan, and produced the “five tables and four maps” of the standard results template, which were shared with the professionals for discussion and discussion.

Voices from local and grassroots:

A picture to understand the city peak 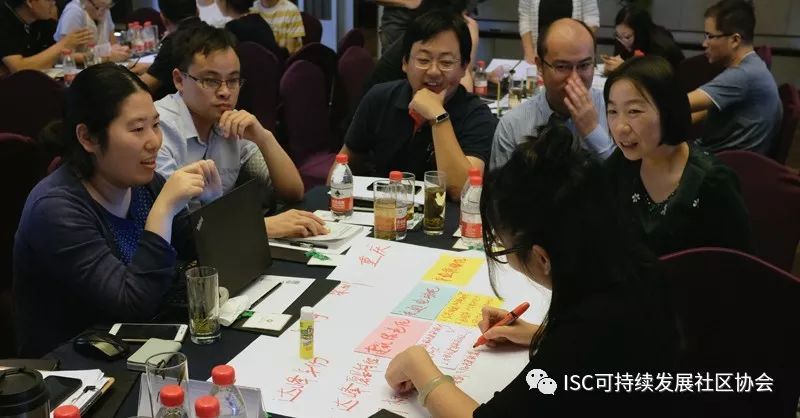 In the practical part of the seminar training, the participants were divided into 10 city groups, such as Shanghai and Changsha, according to the cities they came from, and brainstormed to complete the “One Map of the City Peak”. Through group discussions and designing the peak vision, action goals and action plans of the respective cities, the teams made live sharing. On the basis of case study, the learning results are consolidated through practice and the learning experience is deepened.

Through this meeting, delegates have an overall understanding and understanding of the national cities and regional peaks, and through the case sharing of brother provinces and cities, learn from each other’s strengths and complement each other, and have benefited from the research and development of their respective cities.

The representatives of the conference collided with many beautiful sparks in the study and discussion, and made very good suggestions. I hope that these sparks will become the fire of the Ebara, and promote the sustainable development process in China and the world.